Wilbert is a pastor and was a proud and happy husband of 33 years to the late Alma Floyd. Cee Cee is an evangelist, never been married and had been waiting for ten years and nine months in abstinence and purity until marriage.They met in a very small town called Edenton, NC, population of about 5,000 people. They both were called to that same town in the same weekend, booked at the same hotel for their stay to minister at two different churches. Cee Cee came in from Charlotte, NC and Wilbert came in from Roosevelt, NewYork.  Cee Cee came down for breakfast and Wilbert saw her at a glance but said nothing. Cee Cee ate breakfast and was recognize by someone in his family.
She explained that she use to act on TV but is now a full time minister. She also explained that she had finished her ministerial duties the day before and Sunday was her day off but that she would still love to go to church somewhere. She went on to explain that she was stuck at the hotel until the church that booked her could come and take her to the airport. The friendly bunch invited her on their charter bus and there she was dressed in jeans, a funky Target t-shirt and flip flops heading to an unknown church...with unknown people. However,at the back of the bus was Wilbert Floyd who looked up and noticed her again. This time he was in awe of how the stranger got on their family's charter bus! He helped Cee Cee carry her polka dot suitcase (the one she takes with her everywhere that she preaches) off of the bus and later he reached out via the internet to ask if she enjoyed the service.
She did of course! Little did she know that she would meet her husband at a Hampton Inn/random charter bus ride leading to an unknown church with a handsome stranger...her husband!
GOD IS SO GOOD!
The happy couple would like to thank the
following for their love combination:
1 + 1

=
marriage!
DREAMS DO COME TRUE!!!!!
WATCH A VIDEO OF OUR WEDDING PHOTO GALLERY!
Enjoy the following video below:
Wilbert and Cee Cee's
WEDDING DANCE!
(This is a rough edit...more official videos to come!) 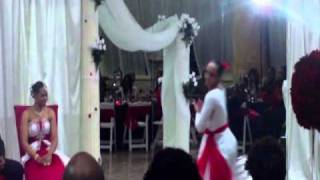 WATCH A VIDEO OF OUR WEDDING
AND HONEYMOON MOMENTS BELOW 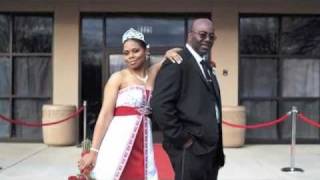